A spate of labor-related election postmortems converged on one key theme: Donald Trump managed to cleave significant union support away from the Democrats.  “Donald Trump Got Reagan-Like Support from Union Households,” ran one typical headline; “It Looks Like Donald Trump Did Really Well With Union Households,” declared another.  But what if these prognoses have it wrong?  Could it be that instead of Trump’s unique appeal to union household voters, the election results really suggest sagging enthusiasm among union households for the Democratic candidate?

Below we display exit poll results from every presidential race dating back to Ronald Reagan’s defeat of Jimmy Carter in 1980.[1]  The figure shows the Democratic candidate advantage over the Republican candidate in the union household vote.  In Reagan’s first victory, there was hardly any Democratic advantage: In 1980, Reagan managed 45% of the union household vote, compared to 48% for Jimmy Carter (the rest went largely to the 3rd party candidate in that race, John Anderson). 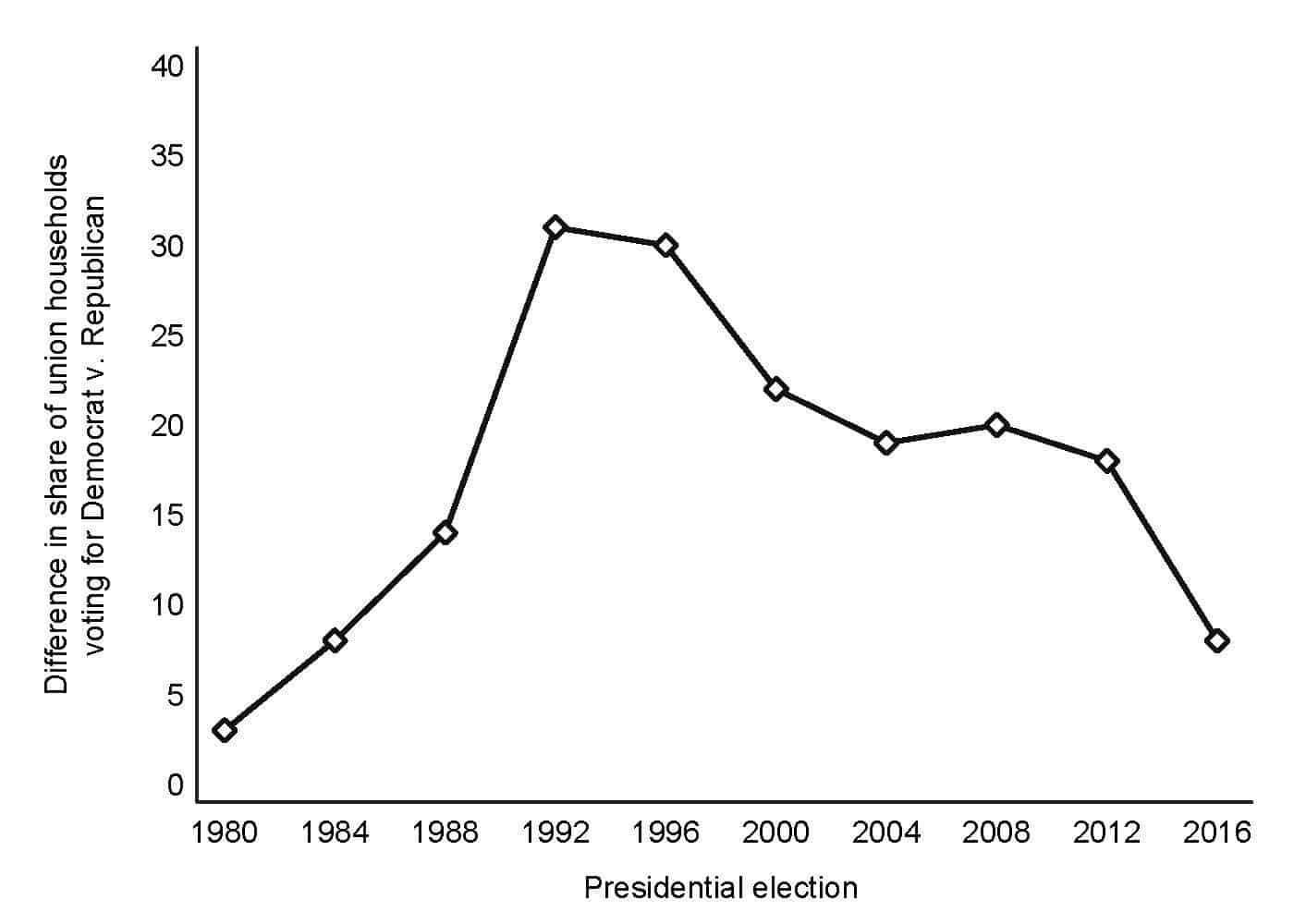 Based on this figure alone it sure appears that the postmortems have it right. In 2016 the partisan split among union households was smaller than at any time since Ronald Reagan’s re-election in 1984. A few caveats to add to the discussion.  First, exit polls are notoriously noisy, and alterations in how the questions about union households are worded mean that the long-term trends we display should be interpreted with caution, as Richard Freeman has highlighted.  Second, the typical union household has changed over time.  On the one hand, as union membership has declined, it’s likely that your typical union household contains fewer members, on average, than it did back in 1980, when the overall unionization rate was over twice as high as it is today.  If true, the fact that the Republican share of the union household vote hasn’t risen all that appreciably is noteworthy.  But countervailing that likely trend are changes in what your typical union member looks like today compared to decades past, as Richard Yeselson has recently noted.  The union member of a union household in 2016 is much more likely to be a public school teacher than, say, an air conditioning manufacturing worker.  Finally, while the data remain spotty, it does seem that Trump’s unconventional campaign won over union households in certain areas.  In Ohio Trump actually outperformed Clinton among union household voters.  Yet in another closely watched state, Michigan, Trump underperformed among union households compared to his national average.

Caveats aside, the evidence thus far cautions against making too much of Trump’s success at wooing union households.  What these results do suggest is the need for Democrats going forward to craft a message and groom candidates that might reverse waning enthusiasm among this core constituency.   Every four years, approximately 2 out of every 5 union household voters choose the Republican in the race.  From this perspective, 2016 was quite typical.  What was atypical was the drop-off in union household support for the Democrat in the race, and yet that decline has received nearly no attention by journalists and other interested parties.

[1] The data displayed in the figures comes from the exit polls results provided by the Roper Center for Public Opinion Research at Cornell University.

Jake Rosenfeld is Associate Professor of Sociology at Washington University-St. Louis.  He is the author of What Unions No Longer Do (Harvard University Press, 2014).  For more on his work, see www.jakerosenfeld.net.  END_OF_DOCUMENT_TOKEN_TO_BE_REPLACED

Patrick Denice is a postdoctoral researcher in the sociology department at Washington University in St. Louis. He received his Ph.D. in sociology from the University of Washington (Seattle) in 2016. His research examines stratification in education and the labor market. END_OF_DOCUMENT_TOKEN_TO_BE_REPLACED