The Cyclist’s Middle Finger: Politics and Work Under Trump

Judging by the number of times it was viewed, this now-famous photograph of a lone cyclist flipping the bird to Donald Trump’s motorcade captured something a lot of people wish to express. 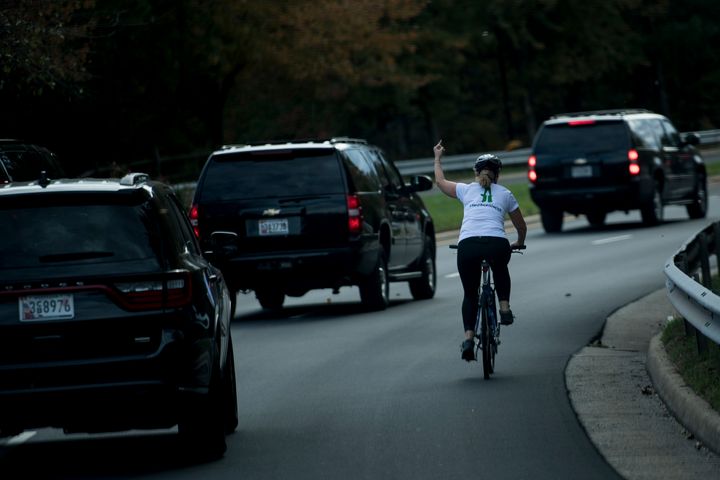 But the woman in the photo has been fired for the gesture. Or, more specifically, she was fired for using the photograph as her profile picture on Facebook and Twitter.

Is the discharge legal? In normal times, the answer would probably be ‘yes.’ Absent a union contract, Juli Briskman – the woman on the bicycle – could be discharged at will by her employer (a government contractor in Virginia called Akima, LLC). If Akima doesn’t like employees posting about their political views, or doesn’t want them to express their political views with middle digits, then they can fire their employees for doing so. Some states offer private-sector employees protection against retaliation for certain kinds of political activity, but Virginia is not one of those states.

But these are not normal times, especially when it comes to employment law. That’s because the President of the United States is using the employment relationship – the private sector employment relationship – as a battleground for politics and public policy. It started at least as far back as the Carrier debate, during which Mr. Trump blamed the union for job losses and personally attacked the local union president.

Chuck Jones, who is President of United Steelworkers 1999, has done a terrible job representing workers. No wonder companies flee country!

Most recently, the President has called on NFL owners to discipline players who kneel during the national anthem.

If NFL fans refuse to go to games until players stop disrespecting our Flag & Country, you will see change take place fast. Fire or suspend!

In this intervention, Trump frequently used Twitter but also delivered remarks in which he called the players “son[s] of bitches” and demanded explicitly that they be “fired.” If you haven’t seen the President deliver these comments, it’s worth watching, especially the second, almost guttural, “he’s fired.”

Now, think about what it would mean for Briskman not to be protected against discharge for posting her gesture on Facebook and Twitter. It would mean that the President of the United States can, through traditional and social media, using expletives like “son of a bitch,” attack private sector employees and call for their discharge.  But if a private sector employee uses her social media accounts to protest that same President, she has no legal protection, and can in fact lose her job as a result of doing what the President himself has done.

How, then, to translate this unfairness into a legal argument? I think it can be done by dusting off the court’s reasoning in Novosel v. Nationwide Insurance.  Novosel involved a private sector employee who was fired after he refused to participate in a lobbying effort on his employer’s behalf. When Novosel was fired for his refusal, he brought a tort suit claiming that his discharge was contrary to the public policy of the state. In something of a groundbreaking decision, the U.S. Court of Appeals for the Third Circuit held for Novosel. It reasoned that public policy could be derived from the First Amendment, that the First Amendment protects political freedom, and therefore that actions taken by private-sector employers which significantly impinge political freedoms (like firing an employee who refuses to take part in an employer’s lobbying campaign) violate public policy.

Novosel may be a favorite of law professors, but it has largely been ignored by courts. The reason is that it enables employees to import the First Amendment to the private sector workplace through the public policy tort, and thus to avoid what otherwise would be the extinguishing effect of the state action doctrine.

But, today, given that the President is himself turning the private sector workplace into a political battleground, the logic of Novosel should have greater appeal. The decision gives courts a way to hold that it is against public policy to allow the President to attack private sector workers while permitting employers to silence employees who respond in kind. Indeed, it must be contrary to public policy to let the President speak but not to protect the citizens who would talk back in opposition to him.

Perhaps Akima will relent, do the right thing, and offer Briskman her job back. If they don’t, a court should find the company’s actions in violation of public policy.

Benjamin Sachs is the Kestnbaum Professor of Labor and Industry at Harvard Law School and a leading expert in the field of labor law and labor relations. Professor Sachs teaches courses in labor law, employment law, and law and social change, and his writing focuses on union organizing and unions in American politics.  Prior to joining the Harvard faculty in 2008, Professor Sachs was the Joseph Goldstein Fellow at Yale Law School.  From 2002-2006, he served as Assistant General Counsel of the Service Employees International Union (SEIU) in Washington, D.C.  Professor Sachs graduated from Yale Law School in 1998, and served as a judicial law clerk to the Honorable Stephen Reinhardt of the United States Court of Appeals for the Ninth Circuit. His writing has appeared in the Harvard Law Review, the Yale Law Journal, the Columbia Law Review, the New York Times and elsewhere.  Professor Sachs received the Yale Law School teaching award in 2007 and in 2013 received the Sacks-Freund Award for Teaching Excellence at Harvard Law School.  He can be reached at [email protected] END_OF_DOCUMENT_TOKEN_TO_BE_REPLACED